Chivalry vs. Equality: Should Men Still Give Up Their Seats For Women? | Edukasyon.ph 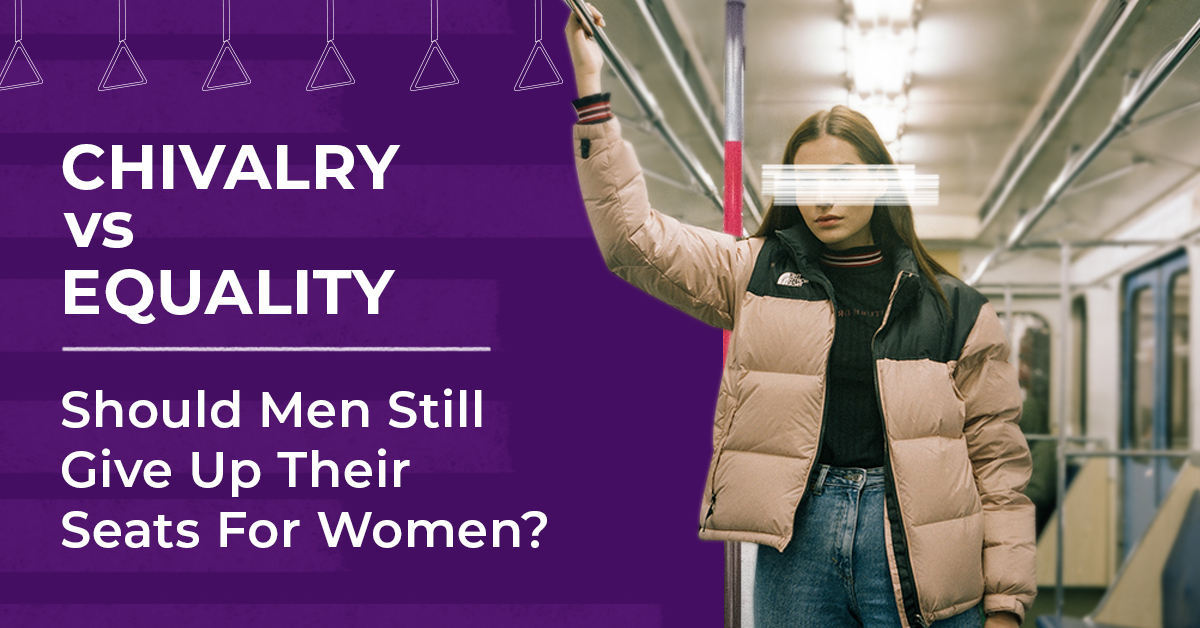 Back in 2014, Top Gear Philippines, a famous motoring magazine and digital site, posted a photo on their Facebook page that sparked a debate.

The picture showed two nurses riding the back of a jeepney along with the caption: “Is chivalry dead? We really hope there was not a single male passenger inside that jeepney.” The said post opened up a heated discussion on gender equality and chivalry.  On one hand, some page followers said the ladies may have chosen this form of commute. But most men in the comments section expressed their confusion over the matter of chivalry; the angry commenters insisted that since women wanted equality, men shouldn’t have to give up their seat in a public transport vehicle. 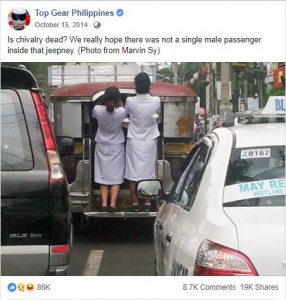 The avalanche of arguments in the comments section prompted the editorial team to clarify the caption by making a follow-up comment: “We don’t wish to argue with anyone about chivalry or gender equality. We’re 100% for gender equality, but we will definitely give up our seat for a lady. It’s not being sexist. It’s not implying that a woman is weak or that she needs to be helped at all times. It just feels right. We’ll probably do it for ourselves as much as for the lady.”

While this social exchange on Facebook happened almost four years ago, one question remains unanswered:

What does chivalry mean in this modern age? In the case of mundane, day-to-day incidents, how can we respond to the call of gender equality for everyone’s benefit?

What is chivalry and is it really dead?

In a historical and literal context, chivalry is more than just an umbrella term for respect towards women. During the medieval era, chivalry is known as a set of values and code of conduct for knights. The word covers how knights should act in their political, religious, cultural, and military functions.

While chivalry emerged at a time where strict gender roles were the basis of everything, the term spoke mostly of living with bravery, courtesy, and respect towards other people’s welfare and towards women who are under a knight’s jurisdiction. Naturally, “chivalry” would spark confusion in the modern era, where women are no longer subject to ownership and subordination.

Does this mean chivalry is dead? One of the commenters on Top Gear’s Facebook post said: “Yes, feminism killed it.”

It’s a funny response, and a lot of people seemed to like the witty comeback. But everything about that comment speaks of all the things that are fundamentally wrong about our culture.

In the Philippines, women are expected to act modestly. This stereotype was perfectly embodied by Jose Rizal’s heroine Maria Clara, whose image shaped the way Filipinas are raised. This context explains why male motorists were outraged upon seeing women riding public transport in a seemingly dangerous position.  Traditional values are also the reason why gender equality seems like a never-ending issue  in our country.

According to UNICEF’s primer on gender equality, “Culture can seem natural and immutable because it conditions not just what people do, but also how they think about and understand what they do. At the same time, a culture is not fixed.”

So while it may be hard to believe, chivalry isn’t dead. There’s a lot of work to be done in terms of gender equality in the Philippines, but chivalry is as much ingrained in our culture as hospitality. Perhaps the best way to understand chivalry in the modern era is to see it as a “theology” that is grounded in “an innate sense of honor,” as explained by Middle Ages historian Dr. Richard Kaeuper.

Now, how do you apply chivalry and gender equality to real-life situations? When a man is sitting inside a train, should he give up his seat for a woman? Should a woman demand to be seated?

Most of the commenters on Top Gear’s Facebook post were divided between 1) letting women do whatever they want and allowing men to keep their seats because chivalry is sexist, or 2) giving way to women because it’s the right thing to do. However, another commenter gave an argument worth exploring: “Gender equality means equality in treatment, privileges, and opportunities. It was never meant to make man the same as women in all respects.”

In this light, it’s best to view chivalry as a two-way street.

If you’re a woman, asking people politely for help instead of demanding for it will allow you to exercise your rights without offending anyone.

If you’re a man, it’s best to ask yourself why you’re giving up your seat in the first place. Are you thinking of doing it because you believe that women are weak and therefore need help? Or are you doing it to be kind?

Whether it’s a mundane or a significant issue, UNICEF advises to always employ a human rights-based approach to gender equality.

“Gender equality is not a ‘women’s issue.’ The issue of men in development is critical because ending women’s subordination involves more than simply reallocating economic resources—it also involves redistributing power. There is a strong case to be made that transformed gender relations will benefit men as well as women.”

At the end of the day, we all have to pay to get into a jeep or a bus or a train. So fundamentally, we all have equal rights to a seat. But giving up your place is a conditional act, and you must decide on your actions based on what you think is morally upright. So if you’re sacrificing your comfort for other people’s sake, it should be less about their gender and more about what you believe a decent human being should do.