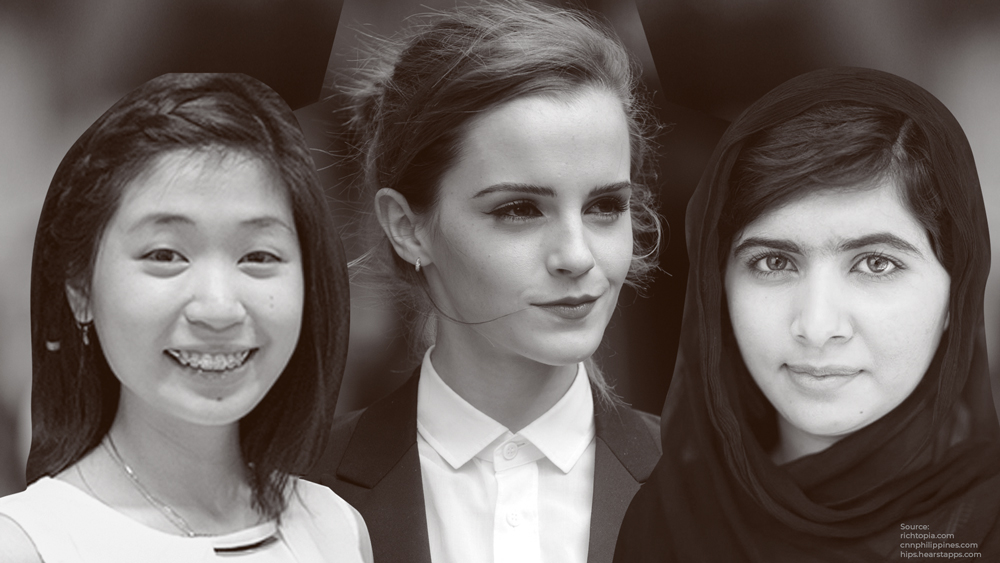 Women all over the world have played an important role in history for years. It’s important to celebrate these wins to recognize the great strides we’ve made in the past decade. These are just a few of the iconic moments in modern history that prove the future is female.

On October 9, 2012 in Pakistan, a gunman boarded a school bus where Malala Yousafzai was seated. She had been contributing to BBC, chronicling her life in Pakistan where the Taliban had been persistent in stopping girls from going to school. She got shot in the head, neck, and shoulder for speaking about education for girls. She survived the gunshots, and at 11 years old, instantly became an advocate for equal rights and promoting peace. She became the youngest Nobel Peace Prize winner at 17 years old in 2014. She continues to be committed in spreading support for girls’ education all over the world even now as she studies philosophy, economics, and politics at Oxford University.

Harry Potter actress Emma Watson was appointed UN Women Goodwill Ambassador in 2014. She became the advocate for UN Women’s HeForShe Campaign and spoke about gender equality at the UN Headquarters in New York the same year. She called on men to take up the issue of gender equality and the cause of freedom for everyone.

In 2015, Biology major from the University of the Philippines Tiffany Grace Uy graduated with a nearly-perfect general weighted average (GWA) of 1.004. It’s the highest GWA recorded by the state university since World War II. She broke the record of BS Mathematics graduate John Gabriel Pelias in 2001 of 1.016. She’s currently pursuing medical studies at the Philippine General Hospital. Her goal is to serve and be influential in the Philippine healthcare system.

At the 2016 Olympics in Rio, Lee Eun-ju of North Korea and Hong Un-jong of South Korea were snapped taking a selfie. The moment was praised widely and said to capture the spirit of the games. Back then, North and South Korea were still thought to be at war with high tensions coming from the missile launches in Pyongyang. The two gymnasts prove that unity can be achieved even with a simple move like taking a photo together. In April of this year, the leaders of North and South Korea met to agree on the goal of denuclearization.

Gymnasts from North & South Korea take a selfie together. This is why we do the Olympics. pic.twitter.com/Id44OuehN3

Young activist Shibby Lapeña De Guzman was photographed marching in front of her school in protest of the burial of Ferdinand Marcos in Libingan ng Mga Bayani in 2016. She was carrying a megaphone and wore a cardboard sign around her neck which mimicked the ones that were seen on some of the victims of the administration’s war on drugs. After being criticized that she and her schoolmates were “brainwashed” by her school to participate in the demonstration, she reiterated that they knew what they were protesting against and they fully understood the injustice that was happening to their countrymen. She participated in Youth Resist, an alternative to the President’s State of the Nation Address spearheaded by the youth. The 14-year-old student was included in TIME’s Most Influential Teens of 2017.

The final contingent of the very first all-female formed police unit (FFPU) in the world who have been deployed by the UN for peacekeeping has finally left Liberia—a decade after they were first deployed in 2007. Their very first commander Seema Dhundia expressed then how her team was skilled and trained in India where there was insurgency. She had confidence that the presence of the FFPU would inspire Liberian women to come out and join the police force.

The movement was founded early this year in response to allegations against Hollywood producer Harvey Weinstein. The organization calls for “safe, fair and dignified work for women of all kinds.” Hollywood actresses banded together to fight against sexual harassment and raise funds for legal defense as well as volunteer lawyers for the cause. In a manifesto posted as an open letter on their website, over 300 women working in film, television, and theater signed to advocate against harassment and hold their workplace accountable.

Actresses + Activists = #whywewearblack: to stand in solidarity with our sisters to say #timesup on the imbalance of power across ALL industries.

These women are not only inspiring, they are also proof that you can be anything you want as long as you put your heart and mind into it. Never doubt the power you have to make things happen!