5 Men Prove There is No Such Thing as an ‘unmanly’ Career Goal | Edukasyon.ph 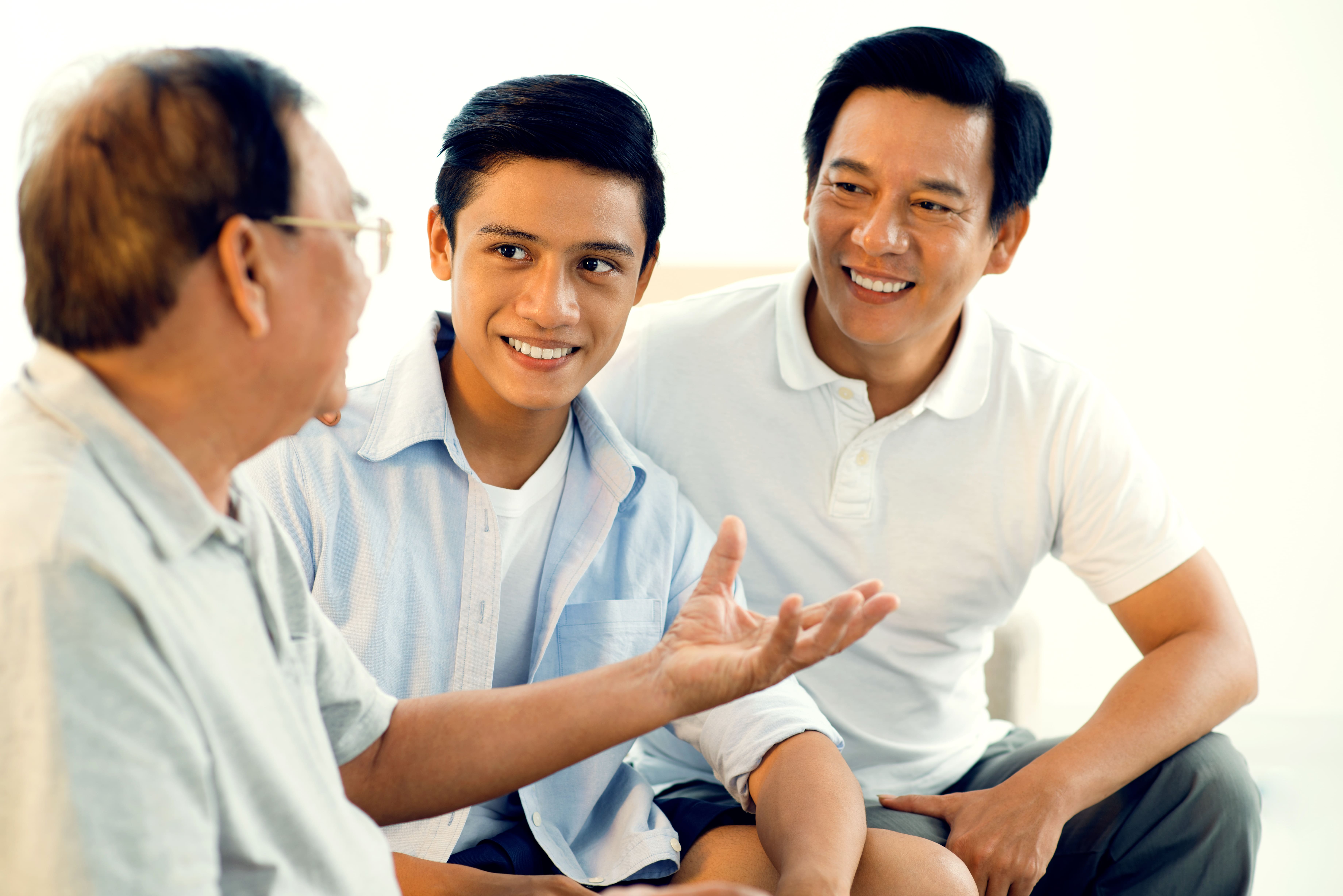 In an episode of 90s American sitcom Friends, Ross and Rachel look for a nanny to look after their baby. They end up hiring Sandy, a man, who clearly shows the most passion and experience in the field of childcare. The arrangement doesn’t last as the whole experience proves to be too much for Ross, who can’t understand why a man would do a job meant for a woman.

It begs the question: can a man pursue work in any field he wants without being emasculated for it?

Here, we speak with five men from female-dominated fields to find out what it’s really like for a man to be surrounded by female peers.

Ellison graduated from Our Lady of Guadalupe Colleges and now holds the position of Head Nurse II at the hospital he works for. “I believe Nursing is one of the toughest jobs in the world,” he says, but the benefits outweigh the challenges. “You get to work hand in hand with great doctors and other medical practitioners. The job also comes with great financial, health, and security benefits.” 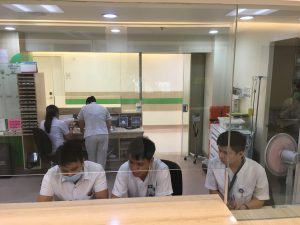 There is a perception that an advantage of being male in the field of nursing is that you are able to handle tasks that require heavy lifting. But Ellison adds a key reason male nurses are great complements to female nurses is, “By nature, we can understand male-specific conditions better,” the same way women understand female-specific cases better.

“I think it was about 35% male versus 65% female,” he says of the student population in his course but also says the demand for male nurses at hospitals is increasing. When asked what another great thing about his job is, he shares, “You get to work with strong, capable, intelligent, funny women.”

“I’ve always liked ads and figured I wanted to make them when I grew up,” Osmond says. When it came time to choose a course, he opted for the degree that Advertising was folded into at the Ateneo de Manila University: AB Communications. He says there were definitely more women than there were men in his class, but “I don’t think anyone would have advantages or disadvantages by virtue of their gender.” 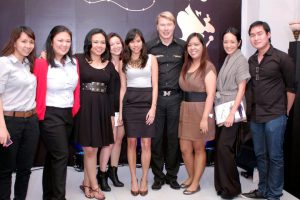 Advertising in itself doesn’t fall under a male-centric nor female-centric industry, but at many agencies in the Philippines, the Accounts department specifically tends to be more female-dominant. Osmond doesn’t feel it is a statistic that needs much reading into. He says of Advertising as a whole: “It’s an industry that is merit-based,” he says, and that it has nothing to do with your gender, age, or anything else. “If you are good at your job, then you are good at your job. That’s all that matters.”

What advice does he share with male students who are concerned about following their dream college course just because it may not be seen as “manly”? “If you have a passion for something, your gender shouldn’t prevent you from chasing your dream. Your gender is something you cannot control, after all. If there are stereotypes you’re afraid of, smash them. Do your best to succeed, it’s the best way of proving others wrong.”

John, like Osmond, holds an undergraduate degree in Communications from Ateneo de Manila. He is currently taking his Masters in Art Studies at the University of the Philippines. “There is roughly a ratio of 1:3 men to women in my Masters classes.” 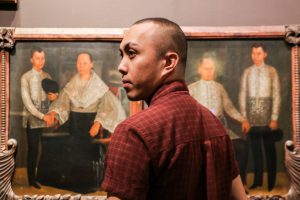 John Balaguer at work in a museum

He says that in both instances, there were no advantages nor disadvantages being male in a female-dominated arena. The same applies to his job . “It’s refreshing for them,” he says of visitors’ reactions to seeing a male employee among the many women. He adds that there are also certain behind-the-scenes tasks that colleagues, including the women, allow the men to take the lead in, such as handling of large, heavy paintings, or lending their experience in construction for the museum’s exhibition designs.

It’s easy to tell that by giving examples like this, John is actually grasping at straws to come up with any differences that men and women have in his place of work; there just aren’t any significant ones. He says, “Gender roles and expectations in society are no longer as fixed as they used to be, and that has given both men and women more options to learn what you want to learn, do what you want to do, and be who you want to be. There should be no prejudice in working towards any goal, and that includes going through a course dominated by any which gender. Try not to fit into a box. Mold yourself to be the best you can be, and let the box adjust to you!”

Originally from the Philippines, Guillermo is currently based in the USA, and on his Senior year at the Savannah College of Art and Design. He is on his way to earning his degree in Fashion Design, with a minor in Fashion Photography. “I always wanted to study how to bring ideas into the world through art,” he says. Of all aspects of art, it was Fashion that he took to the most. “It felt to me like the program I could most freely explore my creativity.” 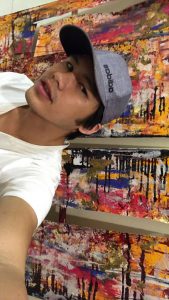 Guillermo Orbos at his school in Georgia

He hesitates to discuss advantages or disadvantages of being part of the male minority in his course, aware that there are already so many biases out there. “I’d hate to think that things work in my favor (or against it) just because I’m a guy,” he says. Any nods he receives, he hopes, are recognitions of the equal respect and dedication he gives to his work, his peers, and his teachers. Respect is an important factor. “I feel like as a straight guy in Fashion Design as well as in Fashion Photography, you just have to be more careful with what you say or do,” he says. At the end of the day, “It’s your work and people will take you seriously if you take it seriously.”

For male students considering a similar direction to Guillermo, he says, “Don’t pass it up just because you’re a guy. It doesn’t matter, and it won’t help you to think that it does.”

After finishing his undergraduate degree in Psychology from De La Salle University in Manila, Raphael went on to complete his Masters in Mental Health Counselling at Monmouth University in New Jersey. Now, he works as a Psychotherapist in the state, helping troubled individuals recover from traumatic experiences. 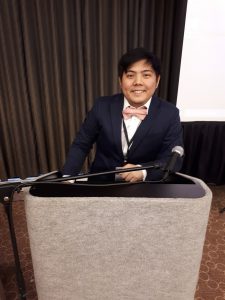 Raphael Samson speaking at a conference

“Yes, most of my classmates were women, but I don’t think either of my courses were ever seen as unmanly,” he says. “Before the more recent Feminist Movement, most of the prominent theorists in Psychology were men, such as Sigmund Freud, Carl Jung, and Alfred Adler.”

On the job front, he does note one standout advantage: security. The United States Department of Labor Women’s Bureau says that over 71% of counsellors in the country are women. However, Raphael shares, “There are some cases assigned only to men, because there are, unfortunately, added risks at stake for our female colleagues.” His female co-workers also take extra security measures in their personal lives. “Most of the women I know in my field don’t display their actual names on their social media accounts to avoid being stalked.”

He does appreciate the field of Mental Health for being “one of the most socially progressive fields to be working in.”

We’re fortunate to belong to a time where the line between male and female jobs is beginning to fade. Hopefully, in the near future, articles like this can be looked back on as nothing more than a story from the past—and a glitch in humanity that we can say we have finally overcome.