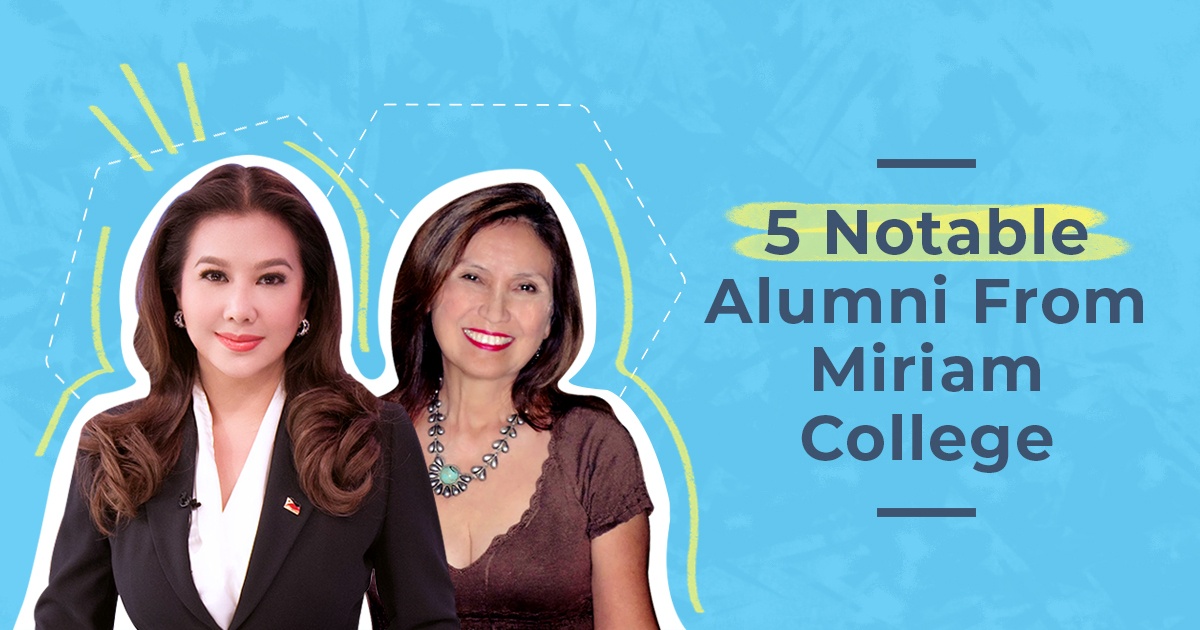 If you’re looking for “women leaders in service,” there’s no other place to look for ‘em than at Miriam College.

Formerly known as Maryknoll College, Miriam College (MC) has been home to generations of empowered women who are committed to excellence and service since 1926. They even have “Women Leaders in Service” posters plastered in every room so they won’t forget!

This exclusive all-girls school along Katipunan Avenue in Quezon City offers academic programs from pre-elementary to post-graduate level. So yes, you can imagine ~literally~ learning your ABCs and earning your PhDs in the same school! How cool is that?

If you’re interested to make MC your new home, take a cue from these five women alumni who lived their college years as proud María Katipuneras!

When you get to host your own show, you know you’ve made it. And Korina Sánchez-Roxas did! (Whoever doesn’t know Rated K! has some serious catching up to do!)

As a household name in Philippine media industry, Korina, as she’s popularly referred to, has gone from writing for newspapers to hosting various radio and TV shows. All’s well and good though since her college years at MC, where she finished her Bachelor of Arts in Communication Arts degree, prepared her well for it!

Gone are the days when women are seated out of business and leadership positions just because… well, they are women. We’ve seen people rally for women empowerment in recent years, and glass ceilings are continuously being shattered all around the world. What can’t women do, right? Just look at Nieves Confessor!

Using her academic and professional competencies in public policy and women development among many others, she became the first woman to serve as Dean at the Asian Institute of Management, and the first Filipino and Asian woman to become Chairman of the International Labour Organization (ILO) Governing Body. Talk about girl power!

Another superwoman in our list of woman #inspos is Soledad Reyes! Being a true blue scholar that she is, Soledad finished her bachelors, masters, and doctorate from no less than topnotch schools, namely Miriam College, UPD, ADMU… and even University of Sussex in the other side of the globe!

With her exceptional service and academic excellence, she was conferred the rank of Professor Emeritus in 2009. Thanks to her impressive teaching stints in both local and international universities! And as if we needed more proof of how awesome she is, her anthology book Nobelang Tagalog 1905-1975: Tradisyon at Modernismo is officially a classic in Philippine literature. All this to say she’s a living legend!

Born in the beautiful island of Cebu, which she writes about in her books as “Ubec” (read: how clever!), Cecilia Manguerra Brainard is an accomplished author and editor who took up a Bachelor of Arts degree in Communication Arts at MC and pursued graduate studies in film making at the University of California Los Angeles.

She is best known for her first novel entitled When The Rainbow Goddess Wept, where she brilliantly weaves Filipino myths and legends with the suffering and tragedies of our countrymen during the Japanese invasion in 1941. Her love for the written word was well recognized, with various distinctions such as an International Gourmand Award and Gintong Aklat Award to name a few.

P.S. Her books have been translated into Finnish and Turkish. That’s like every writer’s dream!

When people hear “Miss Universe,” people often fill their heads with pictures of beautiful women in gorgeous gowns and flashy crowns. We say it’s about time we shift the conversation to genuine advocacy and lasting legacy! (cue: Queen P’s Confidently Beautiful… with a heart!) And our very own Miss Universe 1973 Margie Moran can lead the way!

Even long before Miss U happened, Margie is already passionate about promoting arts, culture, and peace. As a BS Business Administration graduate at MC and Boston University, she advocated for Mindanao efforts through her active involvement with the Mindanao Commission on Women Organization.

Currently, she’s doing it on a larger scale as the Cultural Center of the Philippines’ (CCP) chairperson. Imagine having the passion and position to make things happen? We can only be excited for what’s ahead!

These are just five of the many faces of women leaders in service from Miriam College who are making a positive difference in their chosen fields. How about you? Where do you see yourself leading? Whether it’s MC or elsewhere, developing a heart of service starts with picking the right school that will ingrain it in you. Choose wisely!

Learn more about Miriam College and other universities in the country! Check out more articles like this in the College Life blog section at Edukasyon.ph now!