6 Notable Alumni From The University of The East | Edukasyon.ph 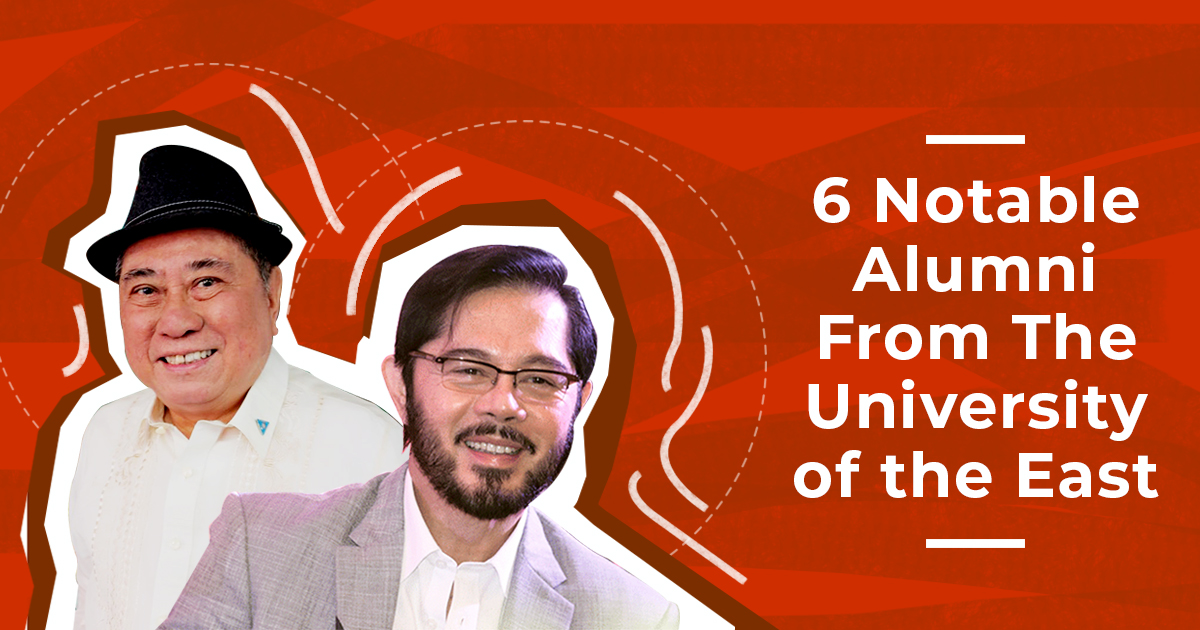 Every school has produced its own set of alumni. But there are some who tend to stand out among people’s minds, either due to the contributions they’ve made to society or the accomplishments they’ve achieved in the process.

Of course, the University of the East (UE) is no exception! From business magnates to National Artists, this institution has its own set of celebrated alumni that students can also look up to!

Whether you’re a budding fresh grad from UE, a student who dreams of taking their education in this school, or even a proud Red Warriors fan, check out some of these inspiring alumni from the list:

If you’ve grown up watching news shows from ABS-CBN with your family, you’ve most likely heard of this fellow “kabayan” signing news shows off with his trademark “Magandang gabi, bayan!” (“Good evening, countrymen!”) spiel. De Castro graduated from UE with a Bachelor’s degree in Commerce while majoring in Banking and Finance. He made waves in the media industry as he became a multi-awarded radio commentator and vice president of DZMM. Eventually, he made waves as a news broadcaster in a number of ABS-CBN shows, particularly TV Patrol and the highly popular “Magandang Gabi Bayan”. He also became a household name after hosting the latter, which featured episodes that exposed local government officials’ illegalities. 2001 was the year De Castro entered politics, where he garnered a senatorial spot before becoming the 12th Vice President of the Philippines under former President Gloria Macapagal-Arroyo’s term from 2004 until 2010. Today, he continues to serve as one of TV Patrol’s news anchors.

Local showbiz and movie fans would find it hard to not recognize this household name! Christopher de Leon is a prominent name in the entertainment industry. He finished his high school education at the University of the East and went on to take a Fine Arts course while majoring in Advertising at the University of the East – Ramon Magsaysay, which he ultimately stopped after entering showbiz during his second year. He appeared in numerous mainstream TV shows, having been a host of the Philippines’ version of “Who Wants To Be A Millionaire?” He also appeared in primetime television series such as “Darna”, “Maging Sino Ka Man”, “100 Days to Heaven”, “Sa Ngalan Ng Ina” and “The Legal Wife”. De Leon’s movie career is nothing to scoff at, having been a lead actor in Lino Brocka’s ”Tinimbang Ka Ngunit Lang” and Eddie Romero’s “Ganito Kami Ngayon, Paano Kayo Ngayon?” His successful acting career led to numerous achievements over the years, having nabbed the FAMAS Best Actor Award five times. De Leon also veered into politics during his career, having served as a member of the second district of Batangas under the Liberal Party.

Chances are, you’ve probably heard of “Ibong Adarna” being retold sometime during your high school years. And you should thank this man for it! Almario spent most of his career as a poet, art critic, educator, and cultural manager. One could trace his UE roots to his time as a student in the 1960s, where he also took subjects under the institution’s Bachelor in Secondary Education and Master of Arts in Education programs. During those years, he also contributed to The Dawn, UE’s student newspaper, before moving up to become the newspaper’s editor-columnist for its Filipino section. Some of his works include “Si Langgam at Si Tipaklong”, “Ang Hukuman ni Sinukuan”, the UP Diksyonaryong Filipino, and a retold version of the literary classic “Ibong Adarna.” His former alma mater eventually granted him an honorary doctorate degree in Literature during his tenure as the private institution’s Chairman of the Komisyon sa Wikang Filipino. His career led him to earn several awards throughout the years, including the Ten Outstanding Young Men (TOYM) award for Literature, several Carlos Palanca Awards, and the Komisyon sa Wikang Filipino’s Makata ng Taon award. Ultimately, his accomplishments led him to become a National Artist for Literature in 2013.

Anybody who grew up watching ABS-CBN might have never recognized his name, but he plays a much bigger role behind the scenes than you think! If you’ve heard of a man who does the spiels whenever ABS-CBN features a commercial, this is the guy you’ll need to thank! Musngi is a prominent voice-over talent at ABS-CBN, and his contributions to the broadcasting network as its announcer earned him the moniker of the “Golden Voice of ABS-CBN”. He graduated from UE in 1972 with a degree in Business Administration. Having grown up in the province, the lure of voice acting fascinated Musngi, which led him to become a DJ in a local pop radio station. He was “discovered” after accidentally singing “Little Peter Rabbit” over the radio, which led to doing numerous voice-overs for commercials and movie trailers. Since then, he has held multiple radio shows during his 30-year stint in the Kapamilya network and has even catapulted Manila Radio Division and ABS-CBN Sports to what they are today.

Known as being the 10th of Forbes’ 50 Richest Billionaires in the Philippines, Andrew Tan is a Chinese-Filipino billionaire who graduated with a Bachelor of Science in Business Administration degree in 1974. Currently, he runs the Alliance Global Group Inc., which handles numerous franchises that are interested in gaming, real estate, and food and beverage. Some of these franchises include real estate mogul Megaworld Corporation, brandy enterprise Emperador Distillers Inc, and McDonalds handler Golden Arches Development Corporation.

Any seasoned basketball fan would find it an insult if we didn’t include this basketball player! Known as “The Living Legend”, Jaworski played for the UE Red Warriors from 1964 to 1966, where his outstanding performances led to him being drafted by the Toyota Comets in 1975. The 6’1 athlete alternated between being a point guard and basketball coach during his stint until he announced his intention to run for Senator – and won the position – in 1998. He served in the Senate until 2004, where he decided to retire from public view.

Want to learn more about the University of the East? Or are you more interested to hear more tips about surviving your college life? Learn all about these tips at Edukasyon.ph’s College Life blog!