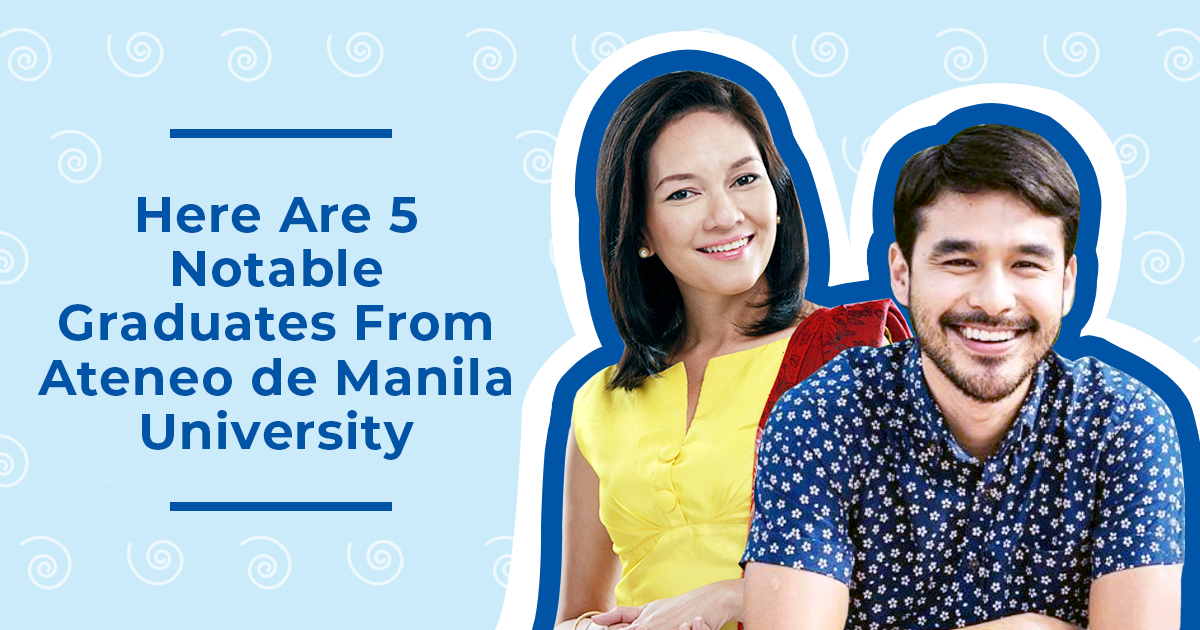 Each university has produced its fair share of celebrated graduates, and Ateneo De Manila University is no different. From arts and culture to journalism and politics, those who come down from the hill have all distinguished themselves in one way or the other.

So whether you’re a fresh-faced college student or someone who’s looking for #goals to follow in life, here’s a sampling of five Ateneans who have done pretty well for themselves—and, in true Atenean fashion, for the others around them.

Every student has seen him at least once. That friendly face on TV bringing you the morning news over hot pandesal. Or, for the majority of us, the weatherman that heralded the cancellation of classes. This journalist, athlete, and TV host began his first years of schooling in Ateneo, where his parents’ active role fighting against the Marcos regime made him keenly aware of social and political issues. He’s been on and off again on different networks as a host but is now focusing on doing documentaries.

One of the incumbent Senior Associate Supreme Justices of our country’s supreme court, Antonio Carpio has served as a distinguished member of our law-governing system for almost a decade. One of his most recent efforts is establishing Philippine’s jurisdiction on the West Philippine Sea – one of his personal and most fiercely-fought for advocacies. Just as expected from an Economics graduate!

Name any list of famous Filipinas and Lea Salonga will likely be there—and for good reason! While the vocalist studied Biology at Ateneo, she auditioned for her now legendary breakout role as Kim in Miss Saigon. She’s been making waves ever since with Broadway musicals and some fan-favorite Disney films like Aladdin and Mulan.

The songstress proves that music can touch hearts and change lives. She recently appeared as a coach on The Voice Teens.

People know Doreen Gamboa-Fernandez for her work on the one thing all Filipinos love: food! A graduate from Ateneo’s own Literature department, she went back on to teach in her alma mater. She also authored several books on Filipino culture, cuisine, and history. Eventually, Fernandez received the CCP Centennial Honors for the Arts as one of the 100 Filipinos who helped shape the arts in the Philippines from 1898-1998.

As impressive as their accomplishments were, all of the Ateneo alumni mentioned above have one thing in common: their work was primarily for the benefit of the Filipino people. They served their country in whichever way they could, bringing recognition and stability to our nation. And at the end of the day, that might be the best goal anyone can have.

Get to know the Ateneo and other top universities in the country? Find your future alma mater with us! Head to our College Life section at Edukasyon.ph now!

Erratum: Atom Araullo is a graduate of Ateneo de Manila’s grade school. We have since updated the article to reflect this.

A writer and creative, Kyle wanders the city looking for interesting stories and people. He uses his writing as an avenue to express himself and pass on the life lessons he's learned in his admittedly eventful life (mostly the result of trial and error.) He is also very fond of penguins.