From Within the Community: How to Be a True Ally to the LGBTQIA+ | Edukasyon.ph 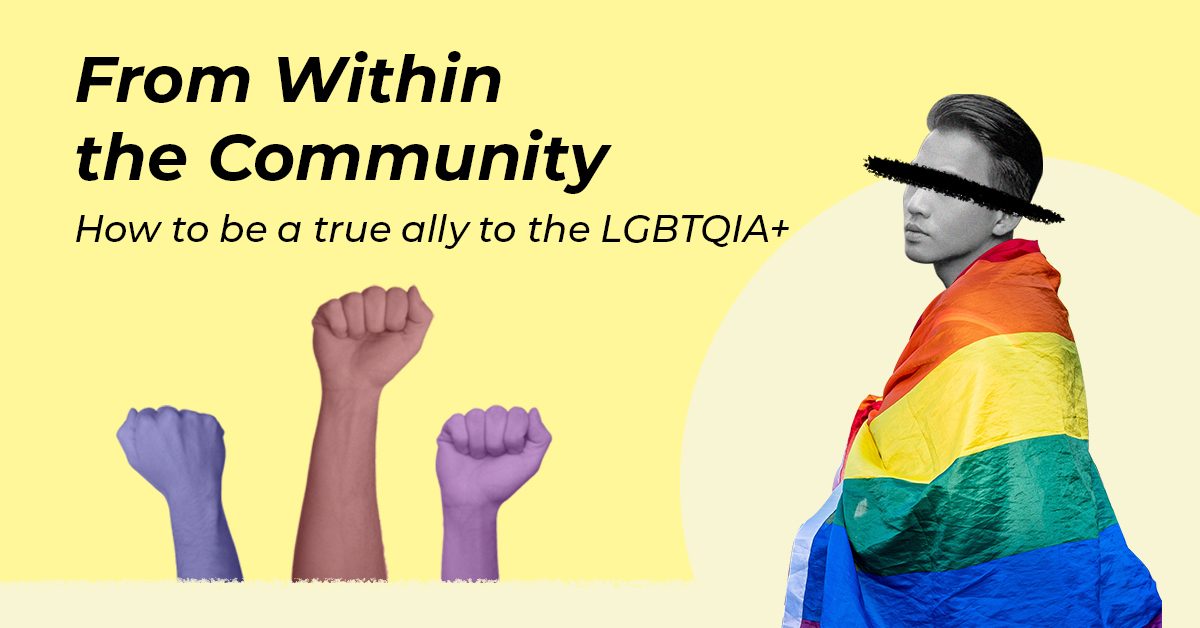 Coming out is a gamble—a massive roulette full of undesirable outcomes. Lucky are the queer kids who ended up in welcoming, open-minded and progressive communities, but generally coming out is terrifying because you never know how people will react.

Queer people are forced to fit into a mold to be “accepted.” They are accepted on the terms that they remain the funny gay friend, the pining lesbian, or the outrageous drag queen. Don’t believe us? Go watch any teleserye or any non-indie movie with a queer character!

Any time they present themselves in their entirety, as people who live and love just like everyone else and not the flat supporting characters they see onscreen, suddenly it’s ridiculous, unthinkable, and unacceptable.

Look harder for the stories of those who came out and were abused for it, kicked out of their homes and disowned by families for an identity they never chose. Listen closer for those who were attacked on the streets, sometimes fatally, all because they were brave enough to be who they are. These stories are true, yet we rarely see them on TV, in movies, or in books—and when we do, they are detested, contested, and rejected.

This disconnect then begs the question: is this really acceptance?

Taking It to the Streets: How to Be a True Ally to the LGBTQIA+

To set things straight: I am not. All the details published here are based on the personal experience and research of a gay millennial. While the youth of today are generally more accepting, the LGBTQIA+ community’s struggle remains the same—it’s a fight to be represented, to be seen, to be accepted, and to be considered deserving of equality.

Growing up in a conservative, mostly Catholic country was a nightmare for someone like me. My family and friends weren’t shy about how they viewed members of the LGBTQIA+ community.

They believed that queer people are mentally ill. They used to say that they live in sin, and that they’re dirty, disgusting, and unworthy of respect. They wish they had never said those words, now that I’ve come out.

They know today that their beliefs were a product of a lack of information and empathy. They hated the community until someone they loved turned out to be part of it. Suddenly, they understood that the LGBTQIA+ were people like me, with names, faces, dreams, and families.

The challenge, therefore, is to empathize. If you’re reading this article, your heart is hopefully in the right place, and you want to be better informed on how to really help. Here are a few ways you could make life easier and safer for your LGBTQIA+ friends or family:

Don’t be afraid to ask questions, from those who are vocal about their identity. We’re more than willing to help people understand.

It was the time I devoted to research that allowed me to know myself and my community better. Straight people don’t have to look very far for role models. The same can’t be said for queer people.

If your friend comes out to you, it is an invitation for you to be truly a part of their life, and questions are probably welcome. Or if you don’t want to ask, information is just a click away, and there are a plethora of resources for you to read through.

Understanding is key. When someone comes out, don’t tease that it’s just a phase, or that they just haven’t met the right person. It is most likely not. It takes a lot of guts to come out to anyone, and it is definitely, not something done on a whim.

Before saying anything, try putting yourself in someone else’s shoes. This applies to all interactions. As a teenager, I was surrounded by rowdy, hypermasculine boys. I heard some pretty nasty things from them about gay people. They never went as far as excluding me from their conversations and activities, but I felt unwelcome anyway.

I felt it because their words were oozing with disgust, directly for queer people and indirectly, for me. They probably didn’t mean to offend, and they didn’t understand the gravity of what they were saying. It hurt all the same, but I chose to take it rather than be left out. It was far more terrifying to be excluded than it was to put up with their words.

However, every “no homo,” or “that’s so gay,” or “pare, bakla ka ba (bro, are you gay)” is a nail on the closet door—making it harder to come out. A little more mindfulness would have gone a long way.

Do not force people to come out

As mentioned, coming out is a big deal. It may be nothing to you, but to a queer person, it’s a matter of security, life, and often death. This is a central fear that non-queer people are lucky to not understand.

After all, if it were a choice, who would choose to be queer, knowing that they’d spend most of their life afraid that they will never be welcomed into the majority of people’s lives? Who would want to spend the earlier part of their lives in self-hatred and denial thinking that there’s something wrong with them?

If it were a choice, we would choose to be welcomed, accepted, and loved. But it’s not, and the only choice queer people do have is whether to come out or not. Please don’t take that away.

Instead, if you feel someone is hiding, no matter how glaringly obvious, educate yourself and empathize—see where they’re coming from. Make them feel safe, and follow through with that reassurance. If they come out to you, then great! You’ve won their trust. If not, then show them love and support anyway, because it’s their story to tell on their own terms.

March with us! Let’s #ResistTogether.

The Pride March is for all queer people. For all who are still in the closet, living in fear that they will be thrown out of their families or communities. For those who stand tall and true, and endure despite all the hurtful words and actions of those around them. It’s for people who, although different on the surface, live and love the same way you do.

At the moment, the LGBTQIA+ community has some allies. These are non-queer men and women, who empathize with the community and fight for our rights alongside us. They could be parents of queer kids, relatives, or friends—if they believe in, and push for the rights of the community, they could be called an ally.

Empathy is only the beginning. Being a true ally doesn’t end with welcoming a sassy gay friend into your circle, or being a well-intentioned matchmaker. Our voices are loud, yes. Though, we would appreciate you speaking up with, but not over us.

Too long, didn’t read: to be a true ally, stand with us when prejudice and hate beat us into a corner. March with us to a society that doesn’t just tolerate us, but includes and embraces us.

Writing a story of freedom

The most important thing to remember at the end of all this is to recognize the humanity in people. Treat them the same way you would want to be treated, and when you’re able to look beyond the differences, you’ll see how we all just want the same things—to belong, to live, and to be free.

And to any gay, lesbian, transgender, non-binary, asexual, or queer person reading this right now, closeted or otherwise, you are brave and you are valid. It really does get better eventually. Meanwhile, we’ll continue fighting. Take your time. It’s your story to write, and we can’t wait to read it.

March with us. Register on Edukasyon today!

Miguel graduated from Ateneo de Manila with a degree in Theater Arts. He started out in advertising, and is now telling stories full time. What started out as a hobby, became a career. Who would have thought, right?