Meet These 5 Cebuano Heroes, Aside From Lapu-Lapu | Edukasyon.ph 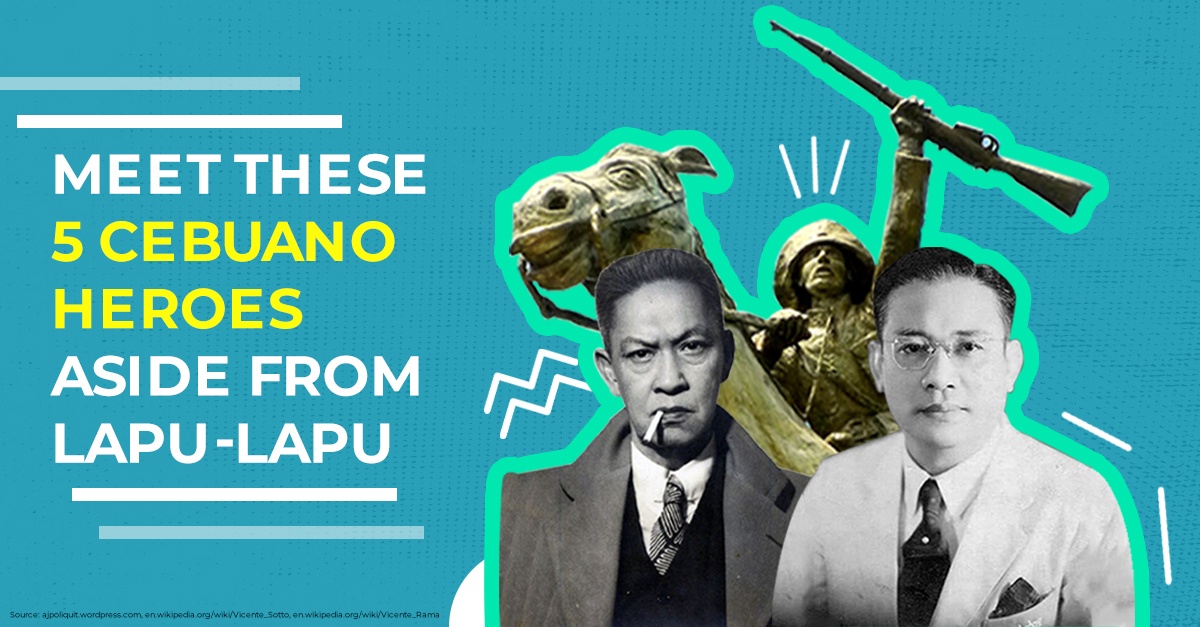 What makes a hero?

When it comes to Philippine heroes, it’s almost impossible not to boast of Dr. Jose Rizal’s nationalism or Gat Andres Bonifacio’s bravery. After all, we celebrate their lives and sacrifices for our country in school and on holidays. But have you ever wondered about other heroes with stories left untold?

Our country’s history speaks of countless heroes in hard-fought battles and everyday struggles, and it’s about time we pay tribute to lesser-known heroes who selflessly served in their own way. What better place to start than in Cebu, the hometown of our first Filipino hero, Lapu-Lapu?

Get your history hats ready, and learn from these 5 Cebuano heroes who made a difference in Cebu and in the whole country. Sugdan na nato!

When the Philippine revolution against the Spaniards was mainly concentrated in Luzon, Lieutenant-General Pantaleón Villegas y Soldi, or popularly called “Leon Kilat,” stepped up in leadership. He led the uprising in the Visayas during the infamous Battle of Tres de Abril.

While most literature would revolve around his controversial death (read: he was betrayed by his troops and killed on Good Friday!), Villegas’ courage and bravery in the midst of seeming defeat will not be forgotten.

P.S. His moniker “Leon Kilat,” or Lightning Leon, came from stories testifying to his ability to quickly appear and disappear in random places. Talk about superpowers!

Heroism is not limited to fighting battles and shedding one’s blood. Sometimes, it can be as simple as giving whatever you have for a cause you believe in. And Cebuano siblings, Pedro and Benigna Cui, did exactly that!

Born in one of the wealthiest families in Cebu, the Cui siblings devoted their time and resources to philanthropy work⁠—particularly helping old people who were abandoned by their families. Today, the Cebuano people still benefit from these siblings’ work through the Hospicio de San Jose Barili, the first privately funded charitable institution in the country.

What can be more heroic than seeing your legacy outlive you, right?

The struggle for women’s rights is an ongoing battle, and Quijano wasn’t the type who would back down from a fight. Despite being an accomplished professional who can choose to comfortably live her life (read: she’s a dentist, teacher, and writer in one!), she grabbed the opportunity to make a stand and let her voice be heard through writing.

She became the first Cebuana feminist fiction writer, and published award-winning literary works advocating for women’s rights. Out of her works came Lourdes, the first feminist Cebuano novel, and other classic pre-war short stories like Maayong Ngalan (Noble Name) and Ang Asawa nga Dala sa Akong Uyoan (The Wife That My Uncle Brought Home). To say the least, she contributed to the women empowerment we experience today! #goals

Not all heroes wear capes. Some run for public service and fight for their city’s rights. Vicente Rama, also known as the “Father of Cebu City,” was that kind of hero. He authored the bill that proclaimed Cebu as a chartered city, despite opposition from local political leaders and organizations. Amazing, right?

Aside from being a prolific legislator and politician, Rama was well-loved by the Cebuano people because of his leadership and integrity. Did you know he didn’t use his influence to bail out one of his children in jail nor to allow his wife to use any government-owned vehicles for personal use? Now, that’s the leader we want.

Last but definitely not least, we have another Vicente on the list! Vicente Sotto was a prominent Filipino senator and politician. He was also known as the “Father of Cebuano Language and Letters.”

If you’re a journalist, he’s the Sotto of the Sotto Law, or the previously called Press Freedom Law (a law that protects journalists from revealing their news sources!). However, if you’re not a media practitioner, it’s okay. You can still thank him for pushing for press freedom in the country—especially in a time when speaking up against injustices is a difficult thing to do. (Thank you, Sen. Sotto!)

Being a hero sounds like a huge responsibility and honor reserved for the likes of Rizal, Bonifacio, or Lapu-Lapu. When in reality, heroism can be as simple as bravely stepping up when an opportunity presents itself. Next time you need a reminder, put on your history hat and remember these Cebuano heroes. If they can do it, so can you!

Ready to be a hero in your own campus? Take the first step! Check out hundreds of schools in Cebu. If you want to learn more lessons on leadership and camaraderie, head to the Commune blog section at Edukasyon.ph now!