Philippine History 101: As Told Through Our Food | Edukasyon.ph 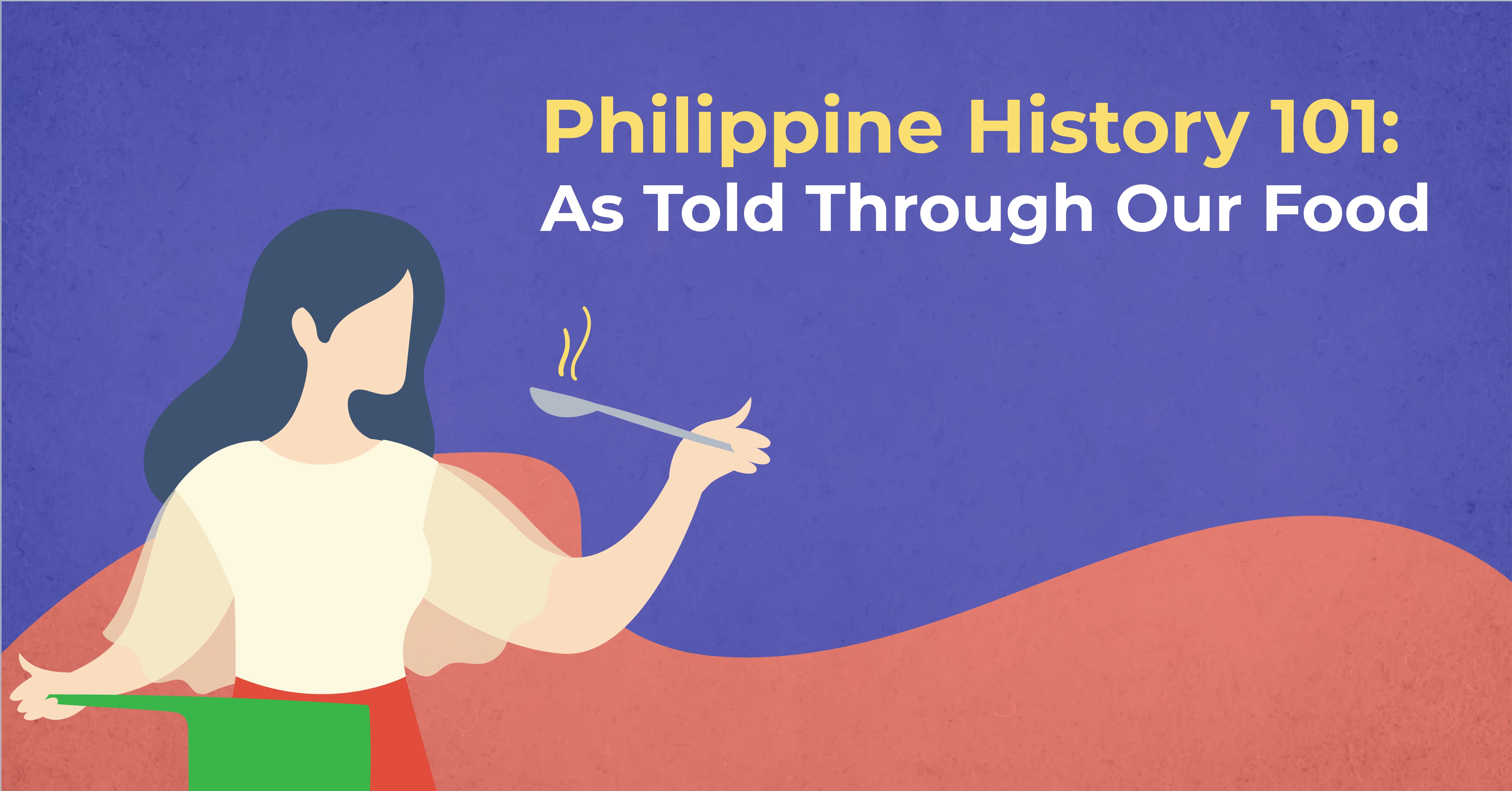 We, Filipinos, love our food. Do a bit of digging (literally, archaeologists have found pots and pans to prove it!) and you’ll discover that food is a huge part of what makes us Filipino.

Three hundred years ago, our national dishes weren’t what you know today. Adobo was an existing dish our ancestors were already making. The Spanish named it adobado from the word adobar (to marinate). Tinola was tinuwa. Sinigang wasn’t even that sour—nor popular!

Our cuisine is how our culture survived from our pre-colonial past to our present. So what can our food tell us about history? Let’s take a closer look.

Filipino food before the fridge

As an archipelago, our early ancestors flocked towards the water. We began our entryway into preserving food through fermentation. Air-drying or smoking meat like tapa and salting fish into our pungent bagoong was born as a means to let our food survive for months, perhaps at sea.

This was food before fridges, writes national historian Ambeth Ocampo.

We also cooked over open fires, foraging herbs and roasting meats. Using fruit and dried leaves to flavor our food—whether a meaty broth, stew, or stir-fry—is a prehistoric tradition that has not left our palate.

A sit-down during the Porcelain Period

The Hindu-Malays added more spices into our repertoire. Enter our Chinese neighbors, cooking their hand-stretched noodles and inviting our ancestors to eat in their homes.

Today, we call it pancit. As per Doreen Fernandez, it’s derived from the Chinese pian e sit meaning “something that is conveniently cooked.” Though in other dialects, it could also mean “feast.”

Many versions of the noodle exist all over the country. Our most popular is probably pancit canton: a noodle stir-fry of garlic, onions, vegetables, and lots of shrimp. Though named after the Chinese city, it can’t be found there. Because the early Filipino translated the noodle to local ingredients, tastes, and traditions.

The Chinese may have invented egg noodles but the Pinoy solidified the fiesta staple.

Something stews in the Spanish settlement

In the 16th century, the Spanish arrived on our shores and invaded our kitchens. With Spanish food came Spanish customs, particularly the religious feast. And that could be why we eat and cook so much.

They brought with them their version of preserving meats through stews. Pop quiz: Try differentiating afritada, caldereta, mechado, pochero.

Tinola, in particular, has a special place in our history and literature. A flu-curing ginger broth fit for a friar, its appearance in Jose Rizal’s Noli Me Tangere set the tone for the rest of the subversive national novel. You can’t go wrong with our humble local rendition of chicken soup—but maybe leave out the neck!

Acid reigns over the American occupation

It’s the early 20th century now. Filipinos and Americans in the post-revolution era were savoring sour food again. It’s their way of sterilizing food. Americans were big on food safety. People were dealing with water-borne diseases, after all.

People cooked with acids like vinegar. They boiled their food and ate a lot of canned goods.

So, sinigang may have caught on well. Though it wasn’t popular yet in the Vis-Min areas. Ige Ramos theorizes that the spread of powdered mixes made that sourness catch on in more southern areas and islands—albeit a late 20th-century innovation.

The post-war staple that broth us together

Liberation! The post-war era was a period of growth and novelty, but also a struggle for many to make ends meet. A common thread among Filipino minds was the entrepreneurial spirit. But still, we were unyielding in our love for food and the community.

And so the first carinderia and turo-turo franchises spread in the 1940s. The 20th century marked the birth of Filipino restaurants, serving cheap filling dishes that reminded people of home.

We loved our broths, and we loved the lutong bahay feeling. In 1938 in La Paz Market, Iloilo, Federico ‘Deco” Guillergan Sr. set up shop to sell bowls of pork and broth for only 20 centavos. He coined the term La Paz batchoy after his customers asked to add some noodles to the soup.

Contemporary cooking for the college rookie

A peek at our history only shows that time and time again, we were creative, adapting to our situations. So, again, dig deep into the next dish you savor. What Filipino food do you love?

Even better: Can you cook it? Grab an apron, find a recipe, and play around with your tastebuds.

Our cooking pro-tip: Get that real meaty taste of a full-flavored stock with Knorr cubes. Not only is it quick and simple, but there are different variations for any dish you want to cook. Amp up that slow-burning sour satisfaction of a shrimp sinigang. Go easy-Chinesey with a stir-fried pancit canton. Make a homey batchoy with lots of heart or stir up some chicken tinola soup for the soul!

What are you waiting—or craving—for? Find your passion with us on the Commune section on the Edukasyon.ph blog!

Created in partnership with Knorr Philippines