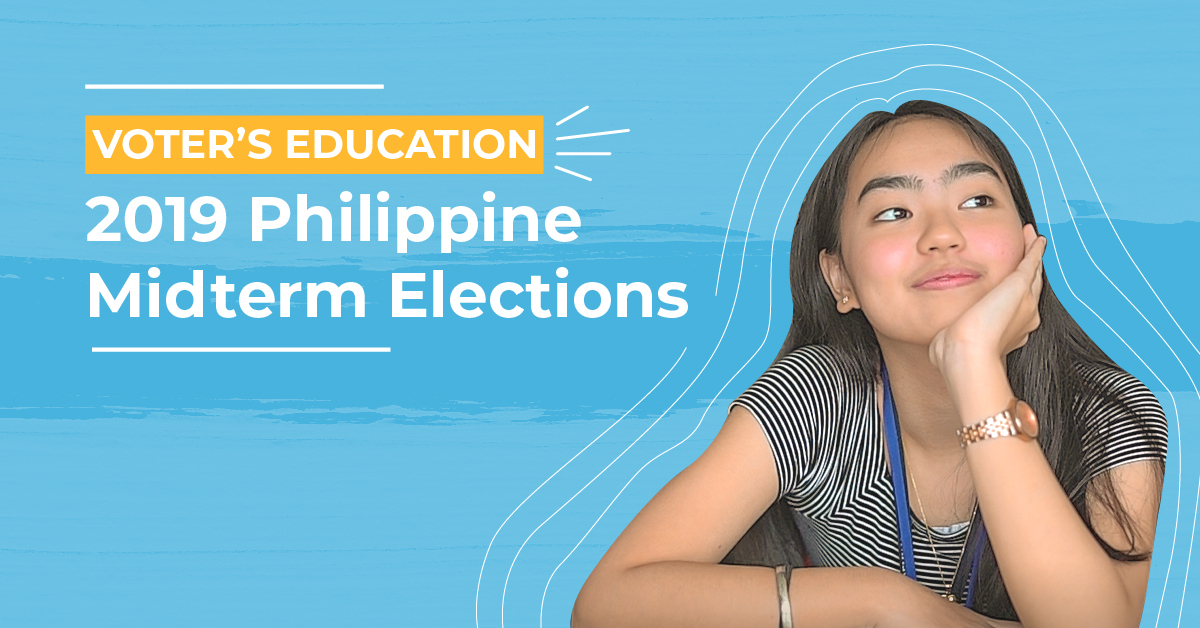 It’s time for the nation to cast its votes on Monday, May 13. Ready or not, here’s a comprehensive guide to voting during this 2019 Philippine midterm elections.

Why should I vote? Does it matter?

Voting is not only a major exercise of your constitutional rights but is also one of the foundations of democracy. Elections benefit the country, especially when we elect the right officials and leaders. You have a say in the direction of the Philippines or, closer to home, your city, municipality, province, or barangay.

Your voice is heard with your vote. That’s what people mean when they say “Every vote matters.”

What are the 2019 Philippine midterm elections?

There are different election seasons: The National (or Presidential) elections, Midterm elections (both National and Local), and finally the Barangay elections.

The Commission on Elections (COMELEC) oversees every election, making sure voting is free, fair, and honest.

Why do we vote every 3 years?

That’s because public officials have a term limit. In other words, that’s how long they stay in office before someone else needs to be elected. For the president, vice president, and senators, it’s 6 years. Congressmen (of the House of Representatives) and local government leaders, however, get 3 years.

Meanwhile, the Senate has 24 seats, and every 3 years, 12 seats are vacated. Midterm elections come in for us to elect 12 new senators, while the other half are still seated. The senators we vote during the midterm elections get to keep their seats during the first term of the next president.

Why is my senatorial vote relevant?

The senators you vote now get to lobby for and pass laws for causes you care about. They will also oversee the implementation and turnover of these laws to the succeeding president after this current term.

Who do I vote for during the Philippine midterm elections?

We’re not going to tell you who to vote, rather which positions you will be choosing candidates for. These are the officials and roles that will show up on your ballots.

A. National Elections: The Congress of the Philippines

Congress is the legislative branch of our government, meaning it has the power to enact, create, and modify, and appeal existing laws. More importantly, Congress is responsible for ensuring that the spirit of our Constitution is upheld in the country.

As part of the Party-List System Act, 20% of the House of Representatives is given to representatives of marginalized and underrepresented sectors.

The vice governor acts as a stand-in for the provincial governor in case of a temporary vacancy. They are also the Presiding Officer of the Sangguniang Panlalawigan (Provincial Board).

The municipal/city mayor is the chief executive of the city government who is responsible for the general welfare of the city and its inhabitants.

The vice mayor acts as a stand-in for the city mayor in case of a temporary vacancy. They are also the presiding officer of the Sangguniang Bayan.

The Sanggunian is the local board assigned to particular provinces, municipalities, or cities. This board is made up of members who pass or approve ordinances necessary for local government to stay effective. They’re in charge of approving funds, generating revenue, and issuing permits and licenses, and ensuring the general welfare of their area.

How do I vote wisely?

When coming up with your election checklist, it can get tricky to make the right choice. Do your research on the different candidates to see if they align with your values. 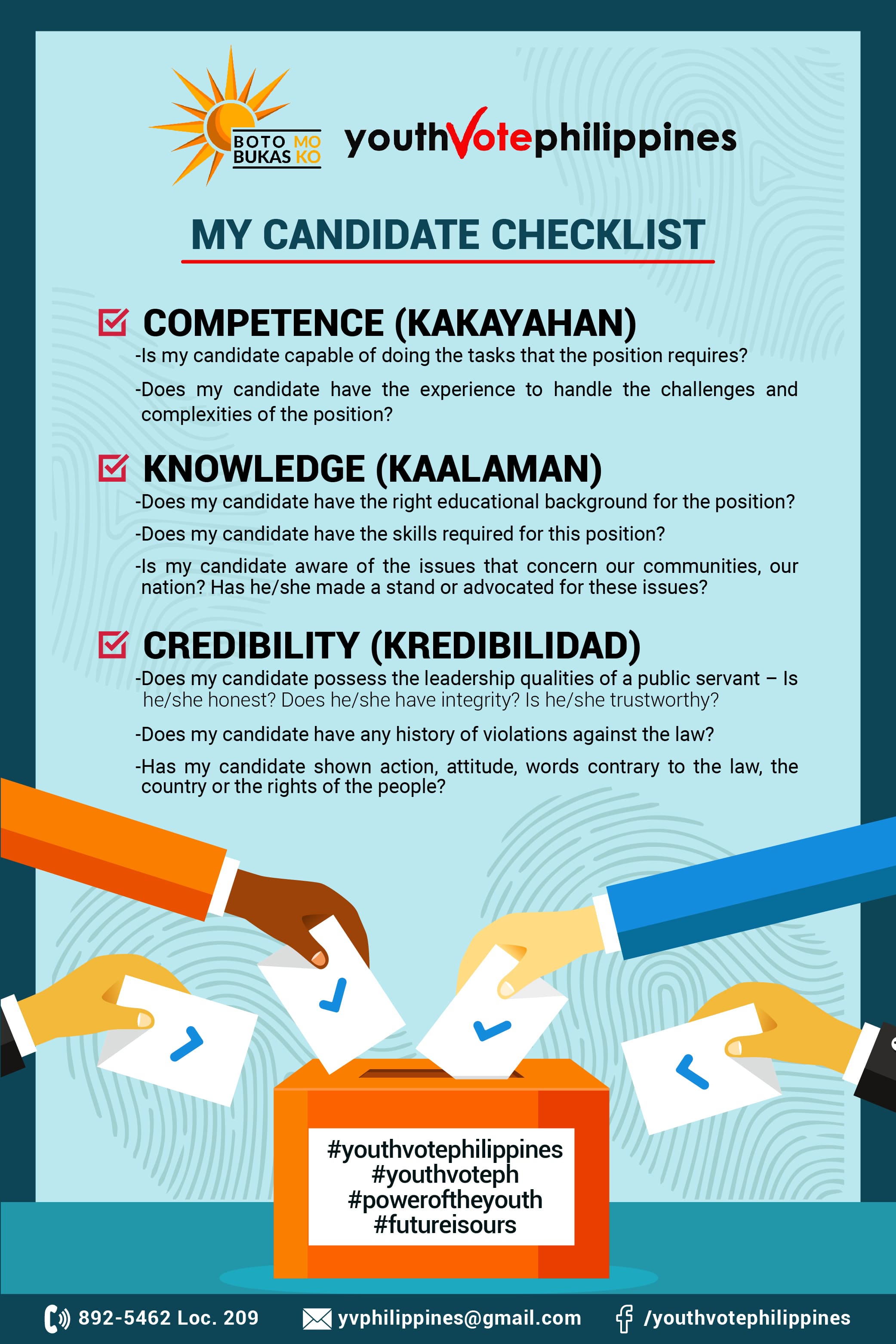 It helps to create a solid platform of the candidate to know if they’re competent, knowledgeable, and credible. Here’s a list of criteria to guide you in making your candidate list for this Philippine midterm elections.

What should I do before election day (May 13)?

Read up on all the candidates and party-lists. There are so many. Find out who aligns with your values. And write down their ballot numbers as well as their names. Especially the party-list.

3. Familiarize yourself with the ballot.

Just so you know what to shade and how to shade. There’s a long list of candidates so look up a ballot and get reading. COMELEC sent out an index of ballot templates for every district here.

What do I bring on election day?

When and where do I vote?

Find your precinct through the COMELEC website or reach them via their hotline (02) 526-7769.

What to do on election day?

If you don’t like lines, go early. Expect to wait, so don’t go too late in the day either.

2. Identify yourself and get verified.

Find your name on the voter’s list posted at your precinct. Go to the designated COMELEC officer to verify that you’re a registered voter. Then they’ll show you which room you’ll go to vote.

Once verified, someone from COMELEC will give you a ballot, a pen, and a folder to hide your votes.

4. Choose your candidates. Do not vote over the maximum number.

If you’ve familiarized yourself with the ballot, it’s divided by positions up for election. You can vote under and abstain from electing the maximum number of candidates. However, voting for more than the maximum can invalidate your vote.

Votes will not be counted if ballots are incorrectly filled. Do you solemnly swear to shade within the circle, the whole circle, and nothing but the circle? Any other marks on your ballot will invalidate your vote.

6. Cast your ballot (but don’t show anyone)!

When you’re done, keep your ballot in the folder given you. Proceed to the vote-counting machine and insert your ballot. Then wait for it to process and give your receipt.

7. Get your voter’s receipt and check for errors.

Voters aren’t allowed to leave without a receipt. Check if your receipt reflects who you voted for. If it doesn’t, you have to file a complaint. If all’s good, the clerk will ink your finger and you can head out.

8. Don’t snap any pics ‘til you’re out of the voting station.

Don’t jump on the indelible ink selfie bandwagon until you’re out of your precinct. Using your phone inside the voting station is an election offense.

In-article graphics were provided by YouthVote Philippines and Bato Balani Foundation. This Edukasyon-created content is intended solely to inform and empower our readers. We are independent of any political influence or affiliation, but encourage eligible Filipino youth to perform their civic duties and exercise their right to vote.

Liked this story? Check out our All About Political Science piece. Wanna learn more about being part of a community and building stronger relationships? Read our Commune section on the Edukasyon.ph blog!