12 Filipinos Who Made the International Limelight in 2018 | Edukasyon.ph 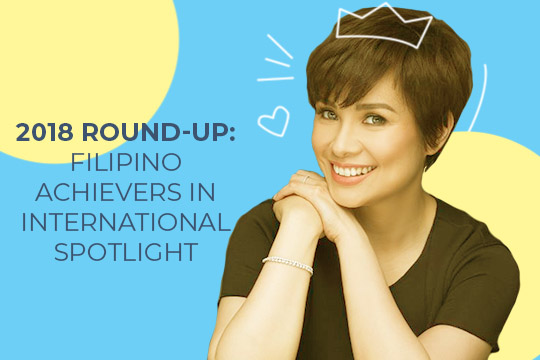 Although 2018 might have been a pretty rough year for Filipinos, we can’t deny the uproar of good news that slips out of the radar every once in a while, thanks to Filipino achievers who’ve made the waves internationally.

From scientists to composers, each of these individuals brought something to the table and got international acclaim for it, bringing the Philippines into the map thanks to their respective contributions.

So if you’re one of those folks who love shouting “Pinoy ako!” every time a Filipino perseveres abroad, here are some Filipino achievers you might also want to draw inspiration from:

The “Ang Larawan” Cast in the Asia-Pacific Film Festival Awards

Known for her famous “lava walk”, the 24-year old Filipino-Australian television host, model, advocate and singer emerged as the new Miss Universe in 2018 after competing against 93 hopefuls for the crown. Aside from Miss Universe, she was also crowned Miss World Philippines in 2016 and made it to the Final 5 in Miss World during the same year.

Also known as the CEO of Teach for the Philippines, an educational initiative that sends aspiring educators to public schools around the country, Delgado was selected as one of 20 Obama Foundation Fellows, where civic leaders from different countries around the world gather for a two-year leadership development supported by former US President Barack Obama and First Lady Michelle Obama.

The 17-year old high school student from British School Manila emerged as the top victor during the World Mathematics competition in Melbourne, Australia. Yu, who was previously lauded as a Senior Individual Champion at the South East Asia Mathematics Competition (SEAMC), had to compete against teenage mathematicians as they battled through challenges that involve data mining, proof rounds, and debates.

Popularly known for lending her singing voice to Princess Jasmine and Mulan from “Aladdin” and “Mulan”, respectively, Salonga was given a Grammy Award nomination for her performance as the love goddess Erzulie in “Once On This Island.” She was also given a nomination alongside the rest of the “Once on This Island” cast for the Best Musical Theater album category.

The veteran journalist was given the Press Freedom Prize for Independence by the international press freedom body Reporters Without Borders. Espina-Varona, who is also a contributing editor, also gave rise to #BabaeAko, a social media women’s rights campaign that was formed in response to President Rodrigo Duterte’s misogynistic remarks against women.

Recognized for her steadfast commitment to press freedom despite numerous external pressure by the Philippine government to shut down, Ressa, who founded independent news site Rappler, was featured by TIME Magazine as one of their Persons of the Year along with several international journalists, being the second Filipino to be given the honor since the late President Corazon Aquino. She was also awarded the 2018 Gwen Ifill Press Freedom Award by the Committee to Protect Journalists (CPJ), an independent body that protects the rights of journalists worldwide.

A Brazilian jiu-jitsu specialist at heart, 28-year old Ochoa dominated the Abu Dhabi Grand Slam Jiu-Jitsu World Championship and nabbed a gold medal for the Philippines in the Female Adult 49KG division. Outclassing four other Purple Belts, Ochoa, who represents ATOS Jiu Jitsu, earned the top prize after overpowering Indonesia’s Fransisca Nelson after a five-minute tussle. She is also a three-time International Brazilian Jiu-Jitsu Federation (IBJJF) world champion and is regarded for being one of the best grapplers in the Philippines.

The renowned “Filipino Flash” was declared a world boxing champion in the Bantamweight Class division for the second time, following his successful match against Northern Ireland’s Ryan Burnett during the World Boxing Super Series Quarterfinals in Glasgow, Scotland. The 35-year old boxer regained his championship in Bantamweight Class after successfully making waves in super bantamweight and featherweight classes during recent years.

Known for her successful stint in “Miss Saigon”, Go was also named Best Actress in a New Production of a Musical by BroadwayWorld UK for her portrayal of Eliza Schuyler in Lin Manuel-Miranda’s “Hamilton”. She was even given distinction by Take 5 Entertainment for being Best Supporting Character with the same role – a role that she successfully won in 2017.

Are you starting to feel motivated enough to join their ranks and make a difference someday? Regardless of the career path you choose, check out Edukasyon.ph’s Career Conversations blog for you to plan ahead!