Creating Connections for the Future | Edukasyon.ph 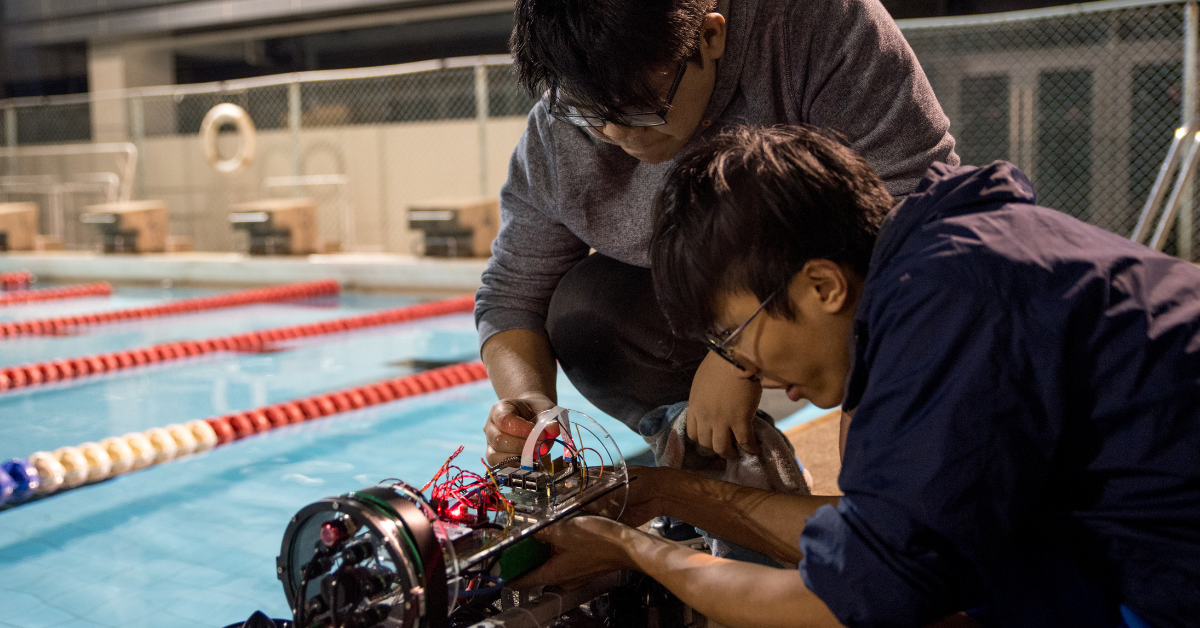 On the top floor of building in a quiet corner of City University of Hong Kong, there is a workshop full of futuristic wonders. Walls of neatly arranged boxes of screws and bolts and reels of cables in candy colors surround robots in various stages of completion.

This is the City University Apps Lab, a co-working space dedicated to skills of the future. Students from different disciplines come here to share their passion for technology, collaborating to create the components which will become ‘Autonomous Underwater Vehicles’ or underwater robots, solar cars or bionic fish.

Dr. Ray Cheung, Associate Professor in the Department of Electronic Engineering and lifelong robot enthusiast is the founder of The Lab. “The people is the most important element in this lab. It’s not the equipment, it’s not the robots, its people. We are transforming our students. We teach them collaboration, determination, and passion.”

The students in the Lab come from Hong Kong and around the world, including the Mainland, Taiwan, India, Afghanistan, India, Europe and the US.

Why are robots so important?

The underwater robots made by students can be used to investigate and control oil leaks, to monitor marine pollution and in coral observation. Their robots can be programmed to go to places humans can’t reach, like the deepest ocean. As Dr. Cheung explains, “We have only explored 5% of the world’s oceans. There are still a lot of questions and unknowns. Underwater robotics presents huge opportunities for the future.”

Code is the language of the future

The students not only learn to design and build robots, they learn to program them too. The team of student coders coordinate programming workshops for CityU students, school children and the general community.

Otto, a Computer Science student and Apps Lab manager explains, “Code is a language of the future. People now learn English or Mandarin as a language of international significance, soon coding languages like Python will be the languages of the future. That’s why we see students from different programs and different majors like creative media or business and finance becoming interested in coding and app development.”

Apps Lab students have developed a range of projects, including an app for CityU’s Student Residence Office to tell students when shared washing machines are free. Also, there is an app for Hong Kong’s underground rail network that functions as a training model for new drivers.

Students applying to join the Lab are judged on their ideas and their willingness to learn. Dr. Cheung explains, “What we look for in our students is not just academic ability. We look for students who have great ideas, a great attitude and a willingness to learn. If the student is lacking in knowledge or ability in a certain area we give them training and peer support.”

Many students involved in Apps Lab have the opportunity to travel overseas to share their work and network with their peers in other countries.

The Lab welcomes students from different backgrounds and disciplines. Furthermore, the space is particularly keen to encourage more women to join.

Knowledge beyond the classroom

After graduating, students involved with the Apps Lab have gone on to work for companies including Microsoft and to found successful startups. The Lab has well-developed connections to industry both in Hong Kong and abroad.

Deep, an Engineering student from India is adamant that the benefits are not just academic. Reflecting on his first year in the Lab, he sees the lab as a community.

“Working with students who are passionate about what they are doing is great. It provides me with insight into my future prospects and job opportunities. It would be hard to find another team like this.”

Futureproof your talents and skills at City University of Hong Kong!

This article originally appeared in the City University of Hong Kong blog with minor edits by the Edukasyon.ph team.