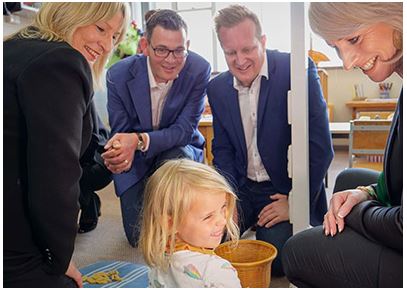 Students and teachers at Chisholm’s Frankston campus will have access to more state-of-the-art facilities following a pre-election announcement from Premier Daniel Andrews that if re-elected the government will provide $67.6 million for Stage Two of the redevelopment project.

Premier Daniel Andrews made the announcement after visiting local mothers taking part in the Frankston Multiple Births Association programs hosted at Chisholm’s campus in the lead up to the Victorian election.

Acting Chisholm CEO Stephen Varty said that Melbourne’s south-east was growing rapidly and Chisholm was working closely with the local industry and employers to identify the skills needed to ensure its students are job ready.

“This is an  exciting announcement and we thank the state government for its support in helping us transform our Frankston campus into facilities that better meet the needs of future generations of students and the local community.”

Stage Two will involve a complete refurbishment of Building E and the demolition of Building C, which will be replaced with a modern facility. The new facilities will modernize teaching spaces and student learning areas, update resources and technical capabilities for students training in multimedia, arts, tourism, and hospitality.

“Access to modern facilities will help students develop the skills they need for those jobs and careers that are in high demand,”  Mr. Varty said.

The announcement complements the $75.9 million Stage One redevelopment of the campus, which is nearing completion and due to be officially opened in the first half of 2019.

Stage One of the project is home to a new state-of-the-art four storey Centre for Health and Community Services and a Centre in Advanced Manufacturing and Trades.

Study in Australia and be molded by one of the country’s well-known and trusted institutions, Chisholm!