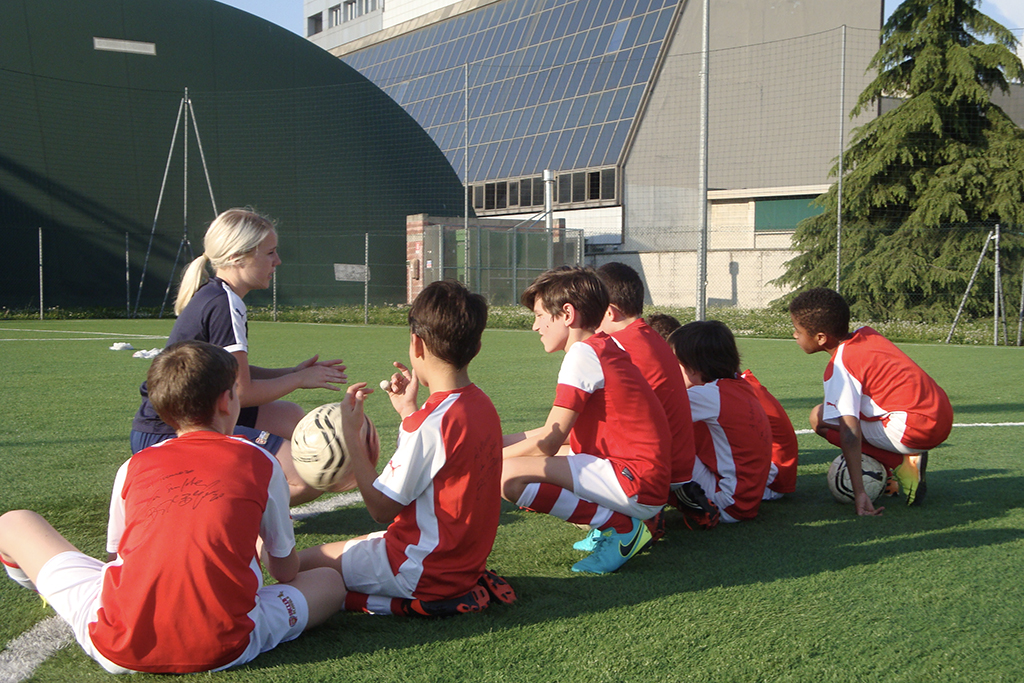 Emilia Lahti is pure endorphin. Everything brings her to laugh and she is very spontaneous, but when it comes to coaching kids to play soccer, she goes straight to the point. Emilia works as a soccer coach at the Arsenal Soccer School and studies B.Sc. in Economics at Università Cattolica del Sacro Cuore. She is twenty one years old and was born in Busto Arsizio, Italy, but grew up in Järvenpää, close to Helsinki, Finland.

She started coaching in January 2017, but arrived about two years before that in Milan. From November 2015 to June 2016 she worked as an au pair in the city. At the time she lived in the vicinity of Parco Nord, a place she still enjoys visiting. Surely at the beginning, life in Milan was not that easy, but right now the city feels like home to her.

David, the head coach of Arsenal soccer school, was searching for someone on the Facebook au pair group, who could work together with him. She applied and since then she has been working as a soccer coach. Half of the kids play in the league, the other half do not. The kids get to learn a little bit of English too, because this is the idiom that Emilia gives them the instructions in.

The most rewarding moment for her during the coaching session, is when the practice goes well. It’s the moment when the kids learn, and when they say “listen to Emilia!” When the kids are happy, it makes Emilia happy too, she tells me.

The first sport she learned was not soccer, but ringette, which she started practicing when she was about eight years old. Her father and brother influenced her into playing to soccer at the age of twelve. “I could be good at this!” she said. By the age of sixteen, a friend of hers started coaching soccer for kids in between the ages of three to ten. So Emilia followed this track as well, and while attending middle school and high school she coached kids twice a week. She also traveled with her team to Turkey to play soccer.

One might think that her favorite toy as a child was a ball, but it was actually a vacuum cleaner. She learned how to stand next to it, so that later she would be able to stand by herself. Because she didn’t have much hair and her best friend was the vacuum cleaner, her parents used to call her as pölypää, which means dust head.

Her parents lived in Italy twenty years ago. She liked the language and the weather as well. It seems to be common sense talking about the great weather in Italy, but if you are from Finland this is a big factor. That is why she wanted to go abroad after finishing high school. One of her best friends wanted to go to Spain to become an au pair there. So she said to herself “I’m gonna do that too.” Either Italy or Spain sounded like a good idea for her. So she went to both places. Emilia spent one month in Valencia, Spain, with her friend, before coming to Italy.

In June 2016, Emilia applied for Università Cattolica. The university accepted her application. Then, she started her faculty in September 2016.

The best thing about living abroad, Emilia recalls, is learning about different cultures and how they work. The people she met in Italy were startled to find out that she loves eating her bread with magarina, but she too was surprised that people in Italy are used to eating pizza once a week.

After finishing her studies, she might do her master’s degree in Italy or might go back to Finland. Maybe an Erasmus in Spain? Or even the United States or Australia? Wherever she goes, I am sure she will always carry the sun with her.