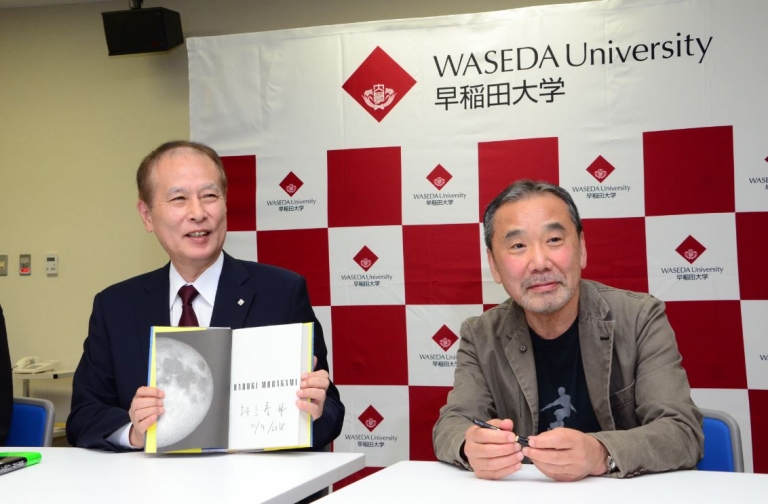 Haruki Murakami, who is famously known around the globe for his literary works recently partnered with his alma mater, Waseda University. The partnership is essential to Waseda University’s initiative to establish an international research center for scholars of world literature and translation.

This partnership will involve the donation of Murakami’s collection of different materials. In a recent Q&A session, Murakami revealed that we would donate over 10,000 records including the issue of literary magazine Gunzo where Murakami won the Gunzo award. He also has plans to share the draft of “Norwegian Wood” if he could find it.

Also, if I could find it, I would like to give the draft of “Norwegian Wood” written in a notebook, though it will be a proofread first draft.” – Haruki Murakami

Known for his works of magical realist fiction, Haruki Murakami has been referred to in many occasions as “The most widely-read Japanese novelist of his generation.” His first book, “Hear the Wind Sing (1979) won a prize for best fiction by a new writer. He then published two novels namely, “Pinball (1973)” and A Wild Sheep Chase (1982) which launched him to international fame.

Murakami has a long list of accomplished novels known across the world. Some examples of these novels are:

According to Waseda University president, Kaoru Kamata, there are three reasons why the international research center of world literature and translation will be established in Waseda.

The university hopes to create a place where cultural exchange is promoted. They also seek to provide Murakami fans all over the world with Murakami literature from the famous novelist himself.

Have plans on becoming a scholar of world literature and translations?