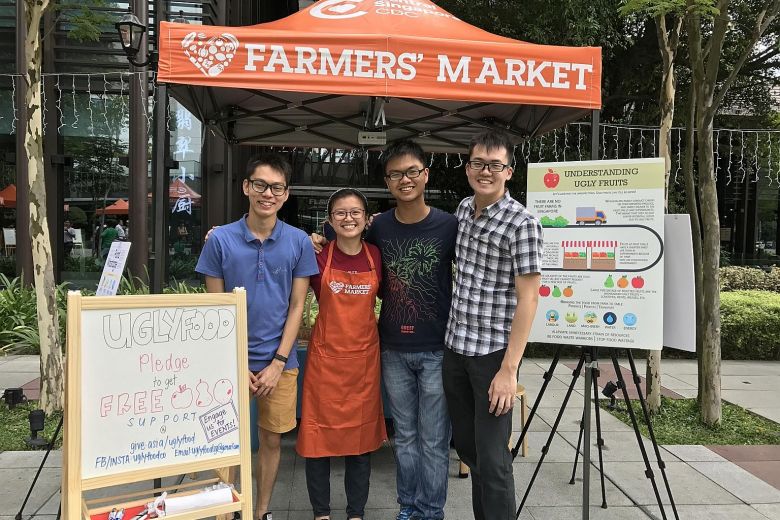 Many people prefer ingredients in a perfect state when they whip up a tasty treat. But a social enterprise is making nutritious refreshments out of “ugly” items as well.

A group of six individuals started UglyFood, which makes popsicles, juices and teas produced from fruit and vegetables that have blemishes, bruises or odd shapes. The concept was initiated by Yeo Pei Shan, who took part in the Design Odyssey programme in May 2016. She said the programme contributed S$1,500 to kick-start her project.  Established by SUTD-MIT International Design Centre, in partnership with the JP Morgan Foundation, Design Odyssey aims to provide students a seamless transition to professional practice by developing a human-centric focus rooted in design, innovation and social awareness.

As an SUTD-SMU Double Degree Programme graduate, she developed an interest in food and waste four years ago when her grandmother fell ill with cancer. Her concern about her grandmother’s health prompted her to research healthier foods, such as fruit and vegetables.

The project impressed Richard Lee, Yeo’s industry mentor from Design Odyssey so much that he joined UglyFood in June last year as one of six co-founders. He is also the programme director of the Millennium Leadership Institute and an adjunct faculty member of At-Sunrice GlobalChef Academy for culinary training.

Seeing the good in ugly

The UglyFood initiative quickly gained traction given how cheap it is to buy blemished food items. Fruit that does not meet the “perfect” criteria is sold in wet markets at a huge discount.

Blemished areas are more prone to oxidation and bacteria growth. However, the flesh of the fruit is perfectly edible once the blemished areas are removed. Fruits with wrinkles – a sign of being over-ripe – is extremely sweet and ideal for juices.

Yeo was told by stallholders that customers tend to pass over blemished fruit, which they mistakenly think is inedible. In fact, a survey of 243 people conducted by students from the Nanyang Technological University this year found that 70 percent of respondents rejected fruit and vegetables that appeared imperfect.

UglyFood first started operating in Shangri-La Hotel’s kitchen during off-peak periods when the facility was not in use.

The kitchen space allowed Yeo and Augustine Tan, business relations manager, to experiment with different recipes for fruit tea. Unlike fruit juice, fruit tea needs to be brewed in pots on stoves over an extended period of time.

Augustine Tan is a third-year information systems technology and design student at SUTD.

UglyFood can be found at different pop-up booths at events such as Car-Free Sunday in Connaught Drive. They sell juices, fruit teas and fruit popsicles. They also operate at Crooked Cooks eatery at the Singapore University of Technology and Design (SUTD). UglyFood will share a store at City Hall MRT station as well so that the regulars can find them.

They get support from friends who believe in the cause of not throwing away good food. Volunteer Wang Zhaomin said the experience has given her an awareness that an imperfect fruit can still be consumed at a safe level as long as it is properly prepared.

“I chose to join UglyFood instead of other food groups because of its cause in saving the fruit during production and before consumption,” Wang said.

Make beautiful things at Singapore University of Technology and Design!