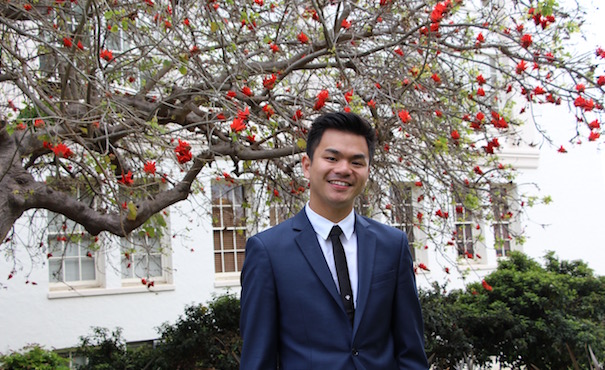 Jonathan Santos finished his Sociology degree at Loyola Marymount University in Los Angeles. He is also the valedictorian of his graduating class of 2018.

Jonathan Santos is kick-starting his dream of working in entertainment news by joining NBC Universal’s Page Program. The Union City, CA native will spend the next year in the highly competitive rotational program working for different divisions of the company while acquiring skills, knowledge, and hands-on work experience.

Jonathan got his start at NBC by interning for entertainment news producers on both “Dateline” and “The Today Show,” and says the exposure gave him the opportunity to network and really begin to learn the ropes.

“The experience is what you make of it,” the Sociology major said. “Treat every day at an internship or workplace like it’s an interview. There’s always work to be done, a new skill to learn – just take that initiative and make the most of every day you’re given.”

Valuable support from the alma mater

As the recipient of LMU’s 2018 Program Scholar Award for Sociology, Jonathan was originally drawn to the bluff for its size and close proximity to the entertainment business.

“I’m definitely coming away from LMU with a greater sense of self-confidence,” Jonathan said. “And my amazing professors and friends have really encouraged me to pursue my ambitions and have been a great support system.”

Moreover, Jonathan believes his Sociology studies through the Bellarmine College of Liberal Arts have given him the tools to succeed in any career path he pursues.

“I’ve developed a better perspective with which to look at the world,” Jonathan said. “Not to mention, the abilities to critically think, write, research – all valuable assets in the media industry.”

Jonathan adds that he was fascinated by a number of classes outside his major as well, including his First-Year Seminar, “Our Media, Ourselves.”

“We took a close look at gender, race, sexuality, and class in media and pop culture and critically analyzed how we consume it, and I ended up doing a research project on Nicki Minaj.” Jonathan said.

Outside of his classes and internship responsibilities, Jonathan was also president of the professional business fraternity Alpha Kappa Psi, president of Harambee Mentorship Club and was a member of the Academic Community of Excellence.

“Really use the resources available to you,” Jonathan said. “I grew up in a really small town, don’t come from wealth, am Filipino-American, and I’m here to tell you it doesn’t matter who you are or where you come from – you can achieve anything.”

Having second thoughts on studying in the United States? Here’s why you should consider it.

*This article originally appeared on the LMU website, with minor edits by the Edukasyon.ph team.